Wildlife abundance within the Ozark Mountains ebbs and flows through the seasons as animals migrate in and out of the oak-hickory ecosystem that exists within the rough hills and valleys that create the Buffalo National River. The Upper Buffalo River region is a favorite destination for elk watchers, bird watchers, and more.

Wildlife observers have recorded 55 species of mammals, 250 species of birds, and 59 species of fish, along with a multitude of reptiles, amphibians, insects, and other invertebrates in the Buffalo River region.
Learn More

An elk herd of about 450 animals makes its home along the Buffalo National River. To learn more about this animals’ recovery, biology and history, check out the Elk Education Center in Ponca.
Education Center 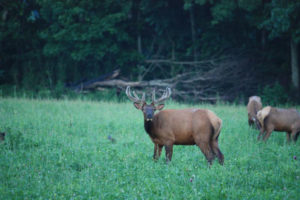 Boxley Valley is the very best destination to see the Arkansas elk herd. The elk are a 12 month attraction. Visitors can witness the entire life cycle of elk from calving in the spring, to the popular annual mating season in the fall. The elk rut that extends roughly from mid-September until mid-November. During the rut, over a hundred elk pool in Boxley Valley. Lucky visitors may witness dramatic bull elk fights for domination and mating rights.

Prospective elk viewers should visit during the end of the days, either early morning to around 8 am, or from about 5 pm until dark (earlier and later in summer heat). In very hot weather viewing times compress, in cold winter weather elk might be visible all day long.

Antered elk are visible the majority of the year. Bull elk drop their antlers around April 1 and immediately begin to regrow them. Antler growth rate is very fast, and by June the big bulls are starting to look large again. Mid-August marks the beginning of scraping of “velvet”, the soft antler covering in preparation for the annual rut just one month off.

June 1st is considered the peak date when elk give birth to their young, called calves. Newborn calf elk are seldom seen until they are a few weeks old.

September and October are the peak of the rut. During this period, bull elk bugle mornings and evenings, thrilling the thousands who make the annual pilgrimage from many states. 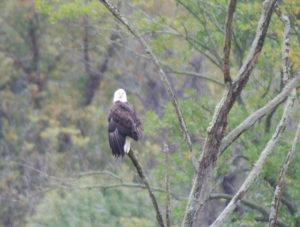 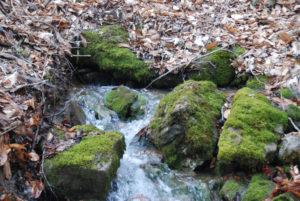 Smith Creek Preserve is 1,316 acres of Ozark forest in Newton County which is bisected by Smith Creek, a tributary to the Buffalo National River.   The surrounding forest is home to bats, turkeys, deer, black bear and elk.  It is a valuable property because the preserve helps keep the water flowing from Smith Creek into the  Buffalo River clean and is a vital connector between the 1.2 million acre Ozark National Forest and the 95,000 acre Buffalo River National River Wilderness Area.  The preserve is owned and managed by The Nature Conservancy.

The preserve is protected by a locked gate at the end of the parking area just off Highway 21 and is 3 miles south of Boxley Valley Church. The trails are well marked and you will be treated to a wildflower bloom, Elise Falls and the chance to see the 3 springs that feed the creek in the spring and early summer months.  The trail is steep and remote and there are no facilities available.  An information kiosk with maps is at the start of the trailhead.